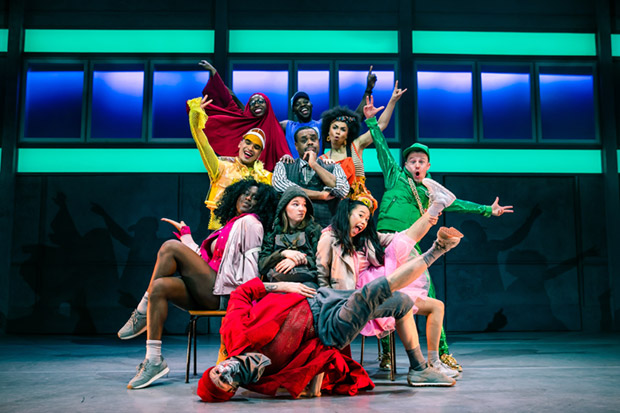 I was invited to attend the press night of In the Willows on Wednesday 10th of April at Oxford Playhouse Theatre.  This was dubbed as the “Explosive new British musical, with soaring vocals and spectacular street dance, starring Olivier Award winner Clive Rowe, deaf Street dancer Chris Fonseca (The Greatest Dancer) and Seann Miley Moore (X-Factor).”

With only one deaf cast member, it was difficult to know what to expect in terms of inclusion, how each of the characters would communicate and what that would mean and feel for the audience, both hearing and deaf.

What was clear from the start, is that this performance of In the Willows would be made accessible through the use of a British sign language interpreter throughout.  Working seamlessly alongside the cast; interpreting the full meaning and mood of the music, rap, dance and language. Laura, was moving to the beat of the music, giving the deaf audience an understanding of the music style and speed. What was also interesting was how they used the lights on the interpreter – it really complemented the lighting used on stage.

When Chris Fonseca first arrived on stage, it was to the song ‘All things bright and beautiful’, in which all of the cast were singing along to. Chris turned to one of the other characters and signed “I’m deaf, I don’t know what they’re singing!”  This, interestingly, gave a side adage to the deaf audience, that the hearing audience who don’t use the language would have missed. It was a great addition, creating a representation of deaf people’s experiences in real life.

There were also songs throughout In the Willows, where British sign language was used to enhance the theatrical experience.  An example of this was in the lyrics, “read the signs”, which the whole cast signed together.

The considerations that had been made to make the performance inclusive had, in my view, gone way above the ordinary. It really did highlight the day-to-day experiences of a deaf person in society.  Conversations were natural, not interpreted – making the whole flow feel much more naturalistic.

What is interesting to see is even when Chris was not on the stage; some of the cast members were signing “4th floor”.  This would suggest that they were so used to having a deaf person around (as part of the storyline), that signing just happened naturally.

In addition to what was a super accessible performance; Chris Fonseca came alive performing the intricate choreography in his solo dance piece.  When he moved onto his signed wrap; the voice-over was incredibly tight which made the whole presentation smooth and streamlined.

The end of the performance was beautifully produced.  The different layers to the harmonies were sung and signed by various cast members.  This layering of all of the parts to create a truly original and inventive piece of theatre.

What was very clear was that not only was the performance of In the Willows entirely inclusive; it was also highly enjoyable for all audiences. On the press evening that we attended, there were very few deaf people.  The hearing audience as a whole seemed to have thoroughly enjoyed the enhanced experience by a hearing and deaf ensemble.