My first day at the BDA 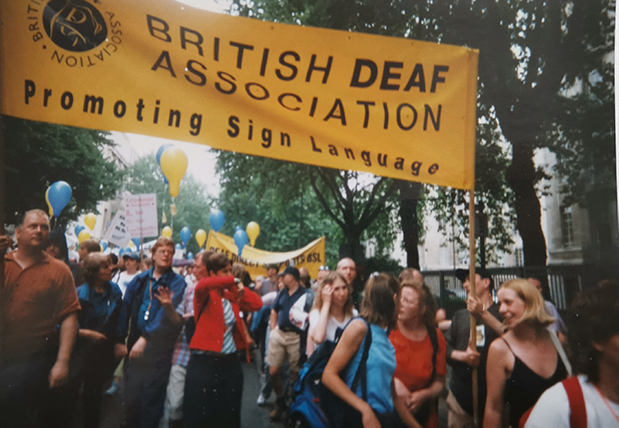 When you think about your first day at work, it already makes you feel full of trepidation. Not knowing what to expect or whether you will fit in with your team. You also want to believe that the job that you’ve wanted for so long is all that you expected it to be.  I remember this feeling well on the first day of one of my jobs at the BDA. Since I’ve spent the majority of my life either self-employed or running a business, it was also one of the few posts I’ve had!

In reality this first day for me was one that would trump all others for stirred up feelings and emotions, and also for my learning.

The BDA, if you don’t know already is the British Deaf Association a charity formed in 1890. It followed the failure of an 1889 Royal commission on the education of deaf children and to consult deaf people. The charity has the aim of “elevating the education and social status of the deaf and dumb in the United Kingdom”.

Before I started, I already knew that a large proportion of the workforce were deaf sign language users and since I already use sign language, I felt excited about my new role. I was ready to use the language I had come to love every day of my working life.

This could mean I felt a level of confidence (not too much mind!) and didn’t really anticipate what this reality would feel like.

The receptionist greeted me when I arrived at the office, (which would soon be my role and responsibility).  I was asked to wait for my manager, he had introduced me to the charity. I thought nothing of this, seeing it as entirely commonplace for this to happen. Then my Manager Michael introduced himself in sign language!

Now, in my naïveté and general lack of thought, I hadn’t even considered I would have a deaf manager. I knew I would be working for a charity where I would use the language daily but hadn’t contemplated this eventuality; and what that would mean for me.

Michael told me about his role, the charity, my role and many other things. To be honest I only understood half of what he was telling me on that day.

He took me on a whistle-stop tour of the building, showing me where each department was and telling me what they were each responsible for. And again, despite my intense concentration I found myself walking away from each department feeling that if I needed to make contact with anyone, I would have no idea how.

In these departmental introductions, he fingerspelt (a function in BSL which is to spell the names of people, places and unfamiliar new words) the names of each of the individuals at the charity. I nodded enthusiastically throughout, not wanting him to know the truth – that I was lost in all of this information. I was feeling overwhelmed.

Ordinarily, a first day renders this feeling, due to the enormous change that you’re embarking on. But it wasn’t that feeling. It was a feeling that I had my induction but missed so much information; and it would be extremely difficult to ask for this information again.

I was concerned that if I did, it would look like I hadn’t paid attention during the induction and I was the type of person that needed to be told everything more than once. This could quite easily lead to my employer believing they had hired the wrong person.

Going home after that first day, I was feeling exhausted, drained and concerned about my future in what was my dream job.

I wondered if every day would feel the same. Would my skills and BSL improve to the point that I could understand all that was said?

All of this was an unknown and added to the stresses of that honeymoon period. I loved the job, the charity, the team was super supportive, but would I keep up? Could I secure the position I had been looking for?

Over time, things became easier. I was only 19 years old, but it was still leading to extreme tiredness at the end of every day,

The consequent immersion in BSL moved forward my language acquisition immensely and after a short while I found my groove. My inner confidence in my ability and my second language developed, both of which enabled me to succeed in my role.

I would come to realise years later what I had actually learnt on that first day of work at the BDA.

I had experienced what a deaf person goes through in every new job they start in, and not just on the first day.

The misinformation.  Worrying about asking people to repeat things, feeling different from others in the team.  Already looking forward and wondering how long the pretence can be kept up.

The parallel experiences have stayed with me ever since, informing and influencing my understanding of what deaf people experience; not only in the workplace, but when accessing all areas of life.

It’s a lesson we could all do with experiencing.  Often it’s only by going through something similar yourself that you can truly put yourself in someone else’s shoes.

Did you enjoy this?  Check more articles out here.