Get to Know Victoria

To be acquainted with someone fully – it is worth taking the time for introductions, so in this post I thought you’d like to get to know me a little, and will be personally introducing myself; Victoria Williams; and explaining who I am, why I am doing what I do as an interpreter; and how terptree came about.

Every business that is set-up has generally done so because of something either positive or negative that has happened in their life.  An experience that has shaped them, affected them and sought them to seek some sort of solution for a problem.  terptree was born out of an experience (a positive one) and has a story, so here it goes.

I grew up in a small village called Selsdon in Surrey living with my parents and brother.  As a young girl, I had a real passion for people.  When we went on family holidays; I was the one making friends on the beach, playing every day; and then swapping addresses on the last day in a burst of tears.  Promising that we would be pen-pals forever.  At this young age, I didn’t realise the power in creating strong and meaningful relationships.  Something that would continue to be a very important part of my life.

At school, I continued to be the one that made many friendships and bonds (also the one that was always chatting in class!).  The two subjects that really interested me at school were spoken languages and business.

I started learning British Sign Language (BSL) when I was 14 when my cousin was diagnosed as profoundly Deaf. The moment I started signing and became involved in the Deaf community – I knew that this was the place for me. Initially I had considered spoken language interpreting, but after my first year of a University degree in German and Applied Linguistics, I felt like there was a missing piece and I quickly realised that my place in the world was within the Deaf community.

In pursuit of the Dream

I left University and pursued my dream, landing a job at the British Deaf Association as a Receptionist – what a wonderful opportunity this was!  It enabled me to learn more about the Deaf community; the services that were on offer and where the gaps were; and made me consider what I could do.

From there I went on to work as an Information and Support Worker in a small London based charity; alongside training as a British Sign Language/English Interpreter.  I completed and graduated with a Post Graduate Diploma in BSL/English Interpreting from University of Central Lancashire in 2005.

After registering as a Registered Sign Language Interpreter (RSLI), and working further within the community; I had a strong feeling that there was more that I could offer to the community.  I decided to set-up a business providing interpreting services; and additional services in order to support the Deaf community – from this feeling; terptree was born. Established in September 2006; terptree is now a household name when it comes to BSL/English Interpreting; and our team are working on projects that change the world for deaf people everyday. 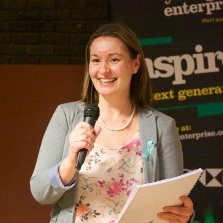