Improvements in closed captioning at Netflix

How important is it to have accurate closed captions?

It’s been a few years since movie and TV streaming giant Netflix faced a backlash from viewers and even the National Association for the Deaf (NAD).  They complained they weren’t paying enough attention to their closed captioning system.

You may remember deaf viewers of the popular program Queer Eye were unhappy.  This was becauase swear words were omitted and even entire sentences had been deleted from the captions.  This meant that deaf audiences were not being given the same experience as hearing viewers.

This came several years after Netflix had been held to task over their high levels of inaccurate captioning. The NAD had already filed a lawsuit in June 2011.  As a result, there was a settlement that required the streamer to ‘adequately caption its library by 2014 and all content for four years’.

Howard A. Rosenblum, CEO and director of legal services for NAD, stated in The Hollywood Reporter:

“We asked them to ensure that the captioning on Queer Eye is at the same level of accuracy as we had negotiated in the original consent decree, which had expired in 2016.” He continued: “It is our position that if a vulgar word is spoken, then it must be captioned. Deaf and hard-of-hearing people deserve to have the exact same access to every word that is heard by everyone else — without any exception.”

Now, although not huge advocates of swearing or vulgar words ourselves we all know the type of content and language a particular programme is likely to have. And we agree with Mr Rosenblum completely. In our opinion, an individual can choose, or choose not, to watch that program knowing it contains ‘strong language’.

Good captioning is often time-consuming and can be expensive. It can take up to six hours to caption one hour of film! So it’s understandable that some producers may see this as a corner to cut.

Netflix does, of course, have a team to oversee captioning and subtitling of its content. It also works with vendors across the globe.

But it’s not entirely about censoring.  An issue that can arise and lead to inaccuracies is synchronising the dialogue, audio and variable reading speeds. Occasionally, something does have to ‘give’. That does make sense and we can see why it could cause problems. But covering the facial expressions of actors, or not applying captions to musical lyrics, for example, shouldn’t be happening.

However, Netflix is trying hard to make positive changes and are embracing crowd-sourced corrections to their captions. They say they’re “getting feedback from our members and our partners in the deaf community from around the world so we can fix mistakes and be responsive to concerns.”

How can you make a difference?

When you see a captioning mistake you can have your voice heard. Social media is a powerful tool for the deaf and hard-of-hearing community to draw attention to shoddy captioning.

And in the case of Netflix, they encourage you to take action and report errors. You can use the question mark button on the bottom right-hand corner of a video when it is streaming.

What helps too is when deaf celebrities rally for the cause. America’s Next Top Model and former Dancing with the Stars contestant Nyle DiMarco did just that. He tweeted about poor closed captioning in cinemas which prompted a response from AMC Guest Services.

All these actions make a difference and yours can too. 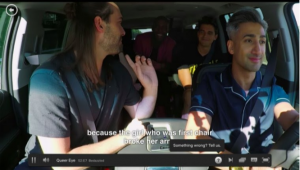