What Is World Federation Of The Deaf (WFD) And What Do They Do?

The World Federation of the Deaf (WFD) was formed 65 years ago in 1951, making it one of the oldest international organisations of people with disabilities in the world. With their focus on protecting and helping deaf people all around the world that communicate via British Sign Language (BSL) and Sign Languages around the world whilst also offering help and advice to friends and family. 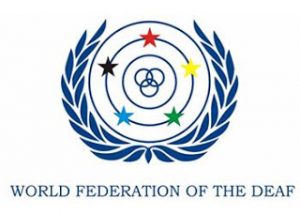 WFD is a non-governmental organization that operates internationally, aiming  to promote the Human Rights of Deaf people worldwide. They work closely with the United Nations and various UN agencies such as the World Health Organization (WHO). WFD provides expert advice on deaf issues and matters in its relationships with other international organisations.

As of the publishing of this post, there are currently 11 board members who are all deaf. The headquarters of the organization is located in Helsinki, Finland.

The aims and objectives of the World Federation of the Deaf are to:

–      Provide better education for Deaf people all around the world

–      Provide better access to information and services for Deaf people

The WFD claims it represents a staggering 70 million deaf people across the entire world! (Possibly even more impressive is that more than 80% of these people live in developing countries) The WFD really are doing their bit for deaf people all over the world and their members continue to grow.

With many more in between including:

–      Syria (Syrian Federation of Societies for the Welfare of the Deaf)

–       United States of America (National Association of the Deaf NAD)

And many, many more! Infact well over 1/2 the world now has a deaf association thanks to the World Federation of the deaf!

There is a World Congress of the World Federation of the Deaf once every four years since its creation. The event will be organised by both the WFD and the varying host country and is attended by thousands of Deaf people from all over the world. The General Assembly (which is the highest decision making body within the WFD) and forming the guidelines for the next four years will be conducted at the quarterly event.

But it isn’t all work, work, work. You still need to have fun and relax and this is why the congress hold a large cultural programme which include:

–          Sightseeing and visiting local places of interest in the host city

The very first congress meeting took place in Rome, Italy and has since seen it visit 5 continents. With the latest meeting taking place in Istanbul, Turkey with them ‘Strengthening Human Diversity’.

The Danish Deaf Association (DDL) recently received funding from the Disabled People’s Organisation Denmark (DPOD) to carry out a phase 1 project which commenced on the 1st February 2016 for one year.

The purpose of the project is to strengthen the organisational capacity of the World Federation of the Dear (WFD) Ordinary Members in Mali (AMASOURDS), Niger (ASN), Togo (AST), Cote d’Ivoire (ANASOCI), and the WFD Regional Secretariat for Western and Central Africa (WCARS). The project is expected to grateful improve the lives of the deaf in the African continent as well as educating deaf people on their rights.

International Week of the Deaf is the only week in a year that sees highly concerted global advocacy to raise awareness about the deaf community at individual, community and governmental level.It is about gathering together, becoming united, and showing that unity to the rest of the world.

WFD truly have and still are making a huge difference to the deaf community around the entire world. Creating and promoting a better world where the deaf are included and gain the support they deserve.

Will you be doing anything for International Week of the Deaf? If so let us know. If you wish to learn more about the great work WFD do, visit their official site here – http://wfdeaf.org/

On the same lines of the World Federation of the Deaf, we have the European Union of Deaf People. Based in Brussels, Belgium, EUD represents all of the 28 EU member states deaf people. In addition they also represent:

EUD is a regional co-operating member of the World Federation of the Deaf to help tackle issues of global importance for the deaf community and also have a participatory status with Council of Europe (CoE). EUD’s vision is to ensure that Deaf people all over Europe have the same rights and help in both public and private aspects of their lives.

They want the recognition of the right to use an indigenous Sign Language, empowerment through communication and information, as well as equality in education and to empower Deaf people.

Their official site is – http://www.eud.eu/