Good day and welcome to our final post of Deaf Awareness Week. It’s been an amazing week filled showcasing exactly what the Deaf community is all about!

So who is the topic of conversation for our final post you ask: She goes by the name of Marlee Matlin. 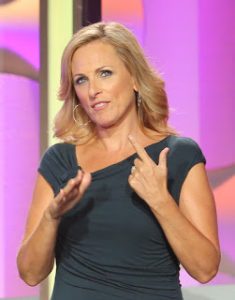 We have outlined her accomplishments in a previous blog entitled ‘5 Influential Deaf Actors’ but we will be highlighting her more prominently here and all the amazing work she has done for the Deaf community.

Where it all began

Marlee Matlin has had a hugely successful career. Making her stage career at the age of 7 as Dorothy in an International Center on Deafness and the Arts (ICODA) children’s theatre of The Wizard Of Oz and continued to appear with the ICODA children’s theatre group throughout her childhood.

She has even portrayed a hearing character in the TV drama Against Her Will: The Carrie Buck Story and her performance earned a CableACE Nomination as Best Actress. On May 6th 2009 she received a star on the Hollywood Walk of Fame.

Giving Back to the Community

She is a vital member of the Deaf community raising the most funds for a charity ever in a single event on TV, on the American Celebrity Apprentice. A total of $986,000 which then Donald Trump donated an additional $14,000 to make it an even million! She is also the American Civil Liberties Union celebrity ambassador for disability rights.

She enjoys a sense of humour about her deafness: “Often I’m talking to people through my speaker phone, and after 10 minutes or so they say, “Wait a minute, Marlee, how can you hear me?” They forget I have an interpreter there who is signing to me as they talk. So I say, “You know what? I can hear on Wednesdays.”

She has also produced an app to help people learn American Sign Language (ASL). Whilst filming her many TV & Film performances she takes the time to visit Deaf children, offering advice and support. Marlee serves as the national spokeswoman for the largest provider of TV closed captioning (CC).  She has spoken on behalf of campaigning the use of CC in countries such as Australia, England, France, and Italy.

This Is Only The Start

That concludes Deaf awareness week from us here at terptree and what a week it has been!

We hope you have enjoyed our posts over this week.  We hope  will continue to join us in our work changing the world for deaf people. This is only the start of what we can accomplish together for the whole deaf community.

We leave you with some wise words from Marlee…..